My husband and one of my sons works in retail, so we’re well acquainted with irregular schedules and working weekends and holidays. But Thanksgiving was always the one holiday that seemed to work out. Mostly because stores close early that day.

This year, though, the unthinkable has happened. Not only is my husband’s store extending their hours, he offered to work so someone else can spend the day with their family. Which means…

We’ve hosted our family dinner for almost a decade now, and we love doing it. So, we’ll be moving our Thanksgiving to Saturday. The calls have gone out, and the schedule shuffling has begun.

Goodbye, Tootsie—the second book in my 1920s romantic mystery series—went on tour earlier this month and got some great reviews. I’m more thankful than ever for book bloggers who dedicate their time to reviewing and promoting books, especially those of indie authors.

Thanks also to the awesome Beck Valley Books, which does a fabulous job of organizing book tours.

Think the trend for pushing the winter holiday shopping season on consumers earlier each year is a modern phenomenon? Think again.

The opening scene of It Had to Be You takes place in Herald Square in New York City on Thursday, November 27, 1924. 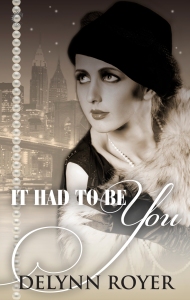 Mystery and Romance in 1920s Manhattan

Here’s a peek back in time from the following day’s papers:

“Santa Claus chose Thanksgiving Day this year to come to town. With a retinue of clowns… animals, and floats, the bewhiskered man in red, in sight of thousands of persons, arrived at 9 o’clock yesterday morning and three hours later was crowned ‘King of the Kiddies’ on the marquee above the entrance to Macy’s new store in Thirty-fourth Street near Seventh Avenue…”

Most of the participants that day were Macy’s employees, but they were joined by many others, marching bands as well as floats featuring The Old Lady Who Lived in a Shoe and Little Red Riding Hood. There were also animals borrowed from the Central Park Zoo—bears, elephants, donkeys.

But no giant balloons. Animal-shaped balloons made by Goodyear wouldn’t begin to replace the live animals until 1927. One of the first? Felix the Cat.

Macy’s at Herald Square (1942). From the Office of War Information Photograph Collection

Another 1924 attraction that would feel familiar to us was the unveiling of Macy’s spectacular store window: “The Fairy Frolics of Wondertown.”

Some sources say a quarter million people attended the first parade. It was such a success, Macy’s decided to make it an annual event.

The world has changed, yes?
But maybe not as much as we think.
What are your favorite Thanksgiving traditions?

For those who celebrate, have a wonderful Thanksgiving!

Macy’s at Herald Square (1942). From the Office of War Information Photograph Collection
Repository: Library of Congress Prints and Photographs Division