To get in the mood for the April release of my 1920s romantic mystery, It Had to Be You, I’m offering up facts, trivia, and slang from that fabulous frivolous decade.  Today and in coming weeks, we’ll take a peek at some fads and entertainment trends of the Prohibition era.

By 1920, Americans were still shell-shocked from the Great War and an influenza pandemic that, combined, took an estimated 700,000 American lives. Is it any wonder that they were eager to put the old decade behind and indulge in some mindless fads and entertainment?

Like never before, the times and the technology were ripe to meet their demand.

You Oughta Be in Pictures … The Movies

Advertising. Radio. Tabloids. They all helped to create and feed the new American hunger for modern products, pastimes and entertainment. So did a young West Coast movie industry that was ready to crank out feature films as fast as audiences could consume them. And that was fast. By 1928, Hollywood was churning out somewhere between 600 and 700 films a year. The movie palaces—over 20,000 of them—were packed.

So, who were the stars that kept 1920s audiences flocking back for more?  The action heroes? The sex symbols? The funny men?

#1    DOUGLAS FAIRBANKS … THE KING OF HOLLYWOOD

Before Clark Gable, there was Douglas Fairbanks, the first “King of Hollywood.”  He was known best for his manly, swashbuckling  roles in adventure films like The Thief of Bagdad and Robinhood, but it was his marriage to “America’s Sweetheart” Mary Pickford that served up juicy fodder for the gossip columns.

Fairbanks and Pickford were the Brangelina of their time–the first stars to immortalize their hand and foot prints in cement in front of Grauman’s Chinese Theater. They also teamed up with D.W. Griffith and another mega-star, Charlie Chaplin, to form their own motion picture studio under a name we recognize today—United Artists.

If Fairbanks was the All-American tough guy of the silent screen, Rudolph Valentino was his counter point. Shooting to stardom by playing sexy Latin lover-types in hits like The Four Horsemen of the Apocalypse and The Sheik, Valentino caused women to swoon and men to shake their heads in bafflement. He was so popular, the word “sheik” became slang for any young man with sex appeal.

Valentino’s career ended abruptly when he died in New York City at age 31 of complications from peritonitis. His viewing turned into a mob scene, with an estimated 100,000 mourners lining the city streets. Stories of distraught fans, including rumors of some suicides, made the news. 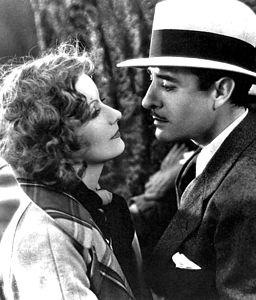 Garbo and Gilbert in A Woman of Affairs 1929

One of Valentino’s rivals for the title of Greatest On-Screen Lover was John Gilbert.

Gilbert’s career took off  in 1924 when he starred in the war epic The Big Parade, and his reputation as a great screen lover was sealed when he appeared in 1926 with Greta Garbo in Flesh and the Devil.  Their on-screen chemistry led to a rocky on-again off-again real life romance that fueled gossip columns as well as ticket sales for two more popular Garbo-Gilbert silent films.

The rapid decline of Gilbert’s career soon afterwards  has been credited to the arrival of sound, but it may have been just as likely due to studio politics and a tumultuous personal life.  Like his film rival, Valentino, Gilbert died too young, at age 38, of a heart attack.

So, what do you think? How do these guys compare to today’s screen idols? Johnny Depp? Ryan Reynolds? Hugh Jackman? Leonardo DiCaprio?
Could Valentino make women swoon today?

Next up? The “It” Girls …. Hollywood’s Top Leading Ladies.
Care to guess who will make the list?